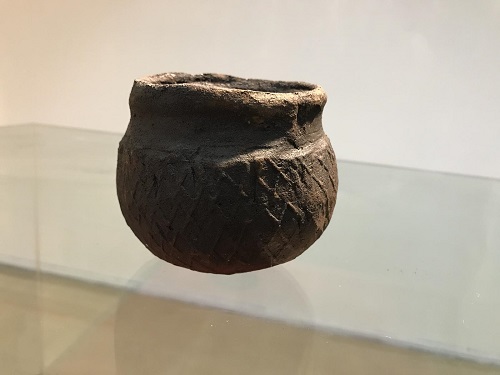 The pottery in Sarawak today, falls into two distinct categories, each with its own history and traditions. The pottery, which is made by a few Iban, Murut and Kelabit potters, is the common hand-moulded, low fired pottery and generally associated with the art of various people of South East Asia. Construction is by the paddle an anvil method and the forms are small and utilitarian in nature. Pottery of this sort appears in archaeological excavations in Sarawak alongside with other cultural materials, which is up to one thousand year old, although it has yet to be definitely established whether this pottery tradition is continuous and unbroken up to the present day.

The second type of pottery is made by Chinese potters, descendants of immigrants from the famous pottery producing area around the town Swatow in Kwangtung Province. These pots (periok), originated from Nanga Sumpah, Batang Ai, Sri Aman, Sarawak created by the only few villagers inherited the skill from their grand grandfather. Hence, it has a traditional value.

The method used in making Iban pottery is very similar to that practiced by the Kelabits and Murut. These pots are mostly rounded and small in shapes. The motifs embellished on the pots depicted floral design simplified with geometries line such as bunga kelawang, bunga luncung (with net design), bunga bunut, bunga mata, bunga terung etc.  It is believed that the food cooked in these pots will taste delicious. This acquisition (2007) is very important to our collection, because it is now facing extinction and showed the rare skilled possessed by the people who struggled to continue their heritage.